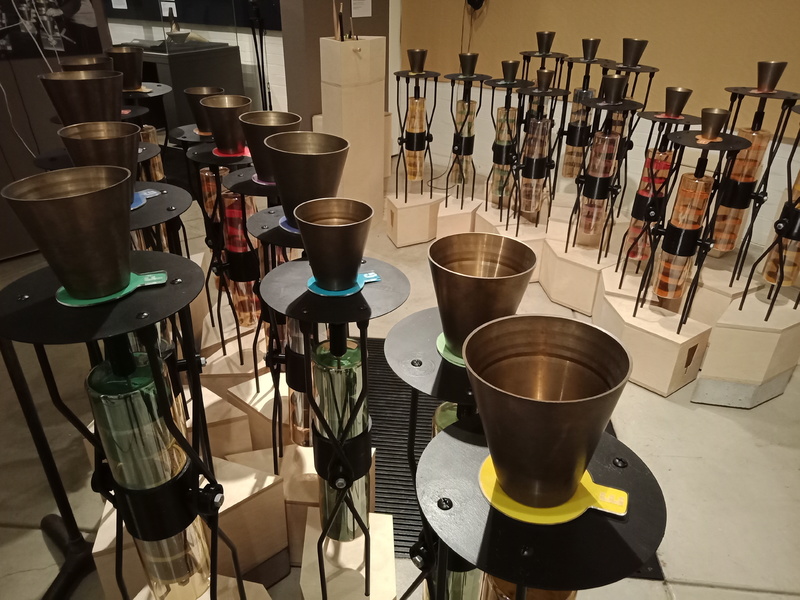 Bell-Field, interactive display of Federation Handbells created by students of the Melbourne School of Design, University of Melbourne, 2019

More than 2000 handbells were made as part of the project. These are known as the Federation Handbells. They are organised into sets of 24 bells, each covering two octaves from E4 to D#6 and can be played in a variety of ways. While most handbells are sounded by a swinging motion, with an internal clapper striking the bell from the inside, the Federation Handbells are played with a mallet on the outside surfaces of the bell. Techniques also include a bow drawn across the top, non-metallic objects rattled inside, and even fingers and fingernails on the bells’ surfaces. They can be held in the hand and played individually or left in their cases and played as a single instrument in the manner of a xylophone or other tuned percussion.

The Handbells had their first performance on 3 November 2001 in the premiere of The Gates of Day, composed by Brenton Broadstock. It was a massive celebratory performance incorporating community players from around Victoria, student percussionists and professional musicians.

The Federation Handbells provide an exciting way to engage people of all ages and skill levels in a musical experience. Since the premiere performance, over 1.5 million people have engaged with the handbells. Through a loans program managed by Museums Victoria on behalf of Creative Victoria, the Handbells are now accessed by professional, education and community musicians and travel throughout Victoria, Australia and the world. 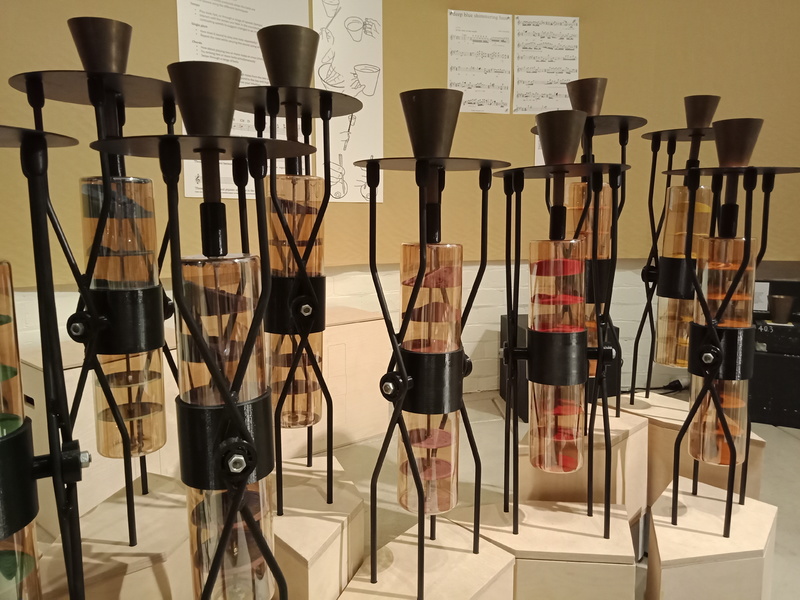 There is a twofold genius to the Federation Handbells. As an instrument they sound beautiful, played by new musicians or virtuosic percussionists; and there are so many of them! These two factors mean the Federation Handbells are remarkably accessible. They are borrowed by a wide range of musicians and have been played at festivals, school projects, commemorative occasions and public events. The handbells were played at the Rod Laver Arena for the National Day of Mourning following the Black Saturday Bushfires in Victoria in 2009, and they continue to be played at significant anniversary events that bring communities together in commemoration of this tragedy. Robyn Archer featured them in the community arts programme Light in Winter Festival, at Federation Square in 2014 and Super Critical Mass used 300 of the handbells at APT8 (Asia Pacific Triennial) 2018 at GOMA in Brisbane. Their spatial acoustic properties are recognised by their use in cross-art-form projects such as the winning entry by Geoff Robinson, in the Melbourne Prize for Urban Sculpture in 2014. Bart Willoughby took them onto Country to the Bungle Bungles National Park – Purnululu, WA to make a recording in 2016.

Renowned Australian composers have been inspired to write new music for the Federation Handbells, including a number through commissions from Museums Victoria. Composers such as Steve Falk, Adam Simmons, Elissa Goodrich, Martin Martini, Deborah Cheetham, Brigid Bourke, and Eugene Ughetti, among many others, have written works for solo bells and for diverse ensembles. While the handbells have been played by some of the world’s top percussionists, such as Peter Neville, they have also been played by amateur musicians, including school children and community groups. All have found expression for their own voice through the opportunity to engage with these remarkable instruments.

The central base for the handbells is close to the Melbourne CBD but there are also six locations set up in libraries around Victoria that form the Federation Handbells Regional and Outer-metropolitan Hubs Network. The hubs are located in Warrnambool, Whittlesea, Bendigo, Wangaratta, Frankston and Drouin. People from around Victoria request to borrow the bells through Museums Victoria and then collect them from their local hub. Museums Victoria also runs skill-building and composition workshops as well as other community programs through the Hubs Network.