Designing and building the Museum 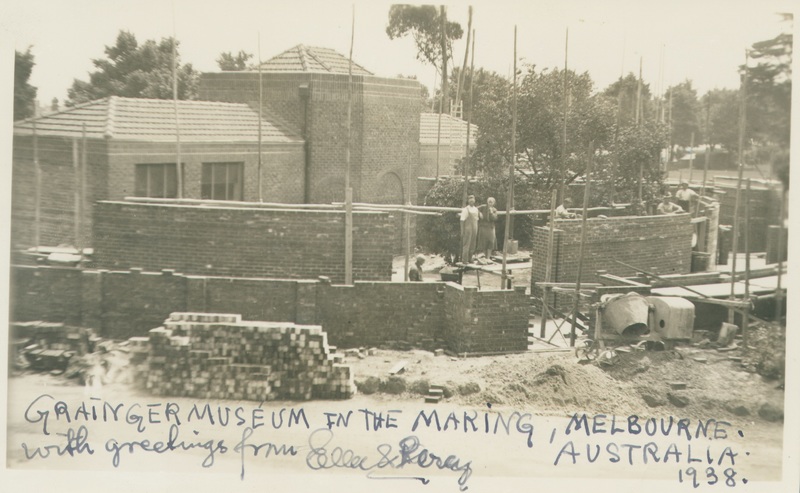 Inscribed photograph of the construction of the Grainger Museum, second phase, 1938

The design and construction of the Grainger Museum occurred in two stages: the central foyer and front galleries in 1935, and the adjoining radial and semicircular galleries in 1938. Throughout the entire process Grainger worked closely with University Architect John Gawler.

The first stage of the Museum was completed during Grainger’s visit to Australia in 1934-35. Grainger decided key features of the building. He chose the distinctive red bricks for their ‘rich color effect’, and specified glass bricks to create natural lighting. Grainger refused to have electricity installed in the building during his lifetime, due to fear of fire destroying the collections. He requested changes to Gawler’s ceiling and roof designs, to facilitate a second story in the future. Grainger had to leave Australia to continue his concert career prior to the completion of this first stage.

Percy and Ella Grainger returned in 1938 to continue work on the second stage. The Museum officially opened on 10 December 1938, with 250 guests in attendance to view the building and the display of ‘manuscripts of musical works, musical instruments, paintings, and personal effects of composers’. The Graingers left immediately after the opening, not to return until 1955. After Percy’s death, Ella continued to support the Museum, exploring new architectural concepts and planning interior displays.