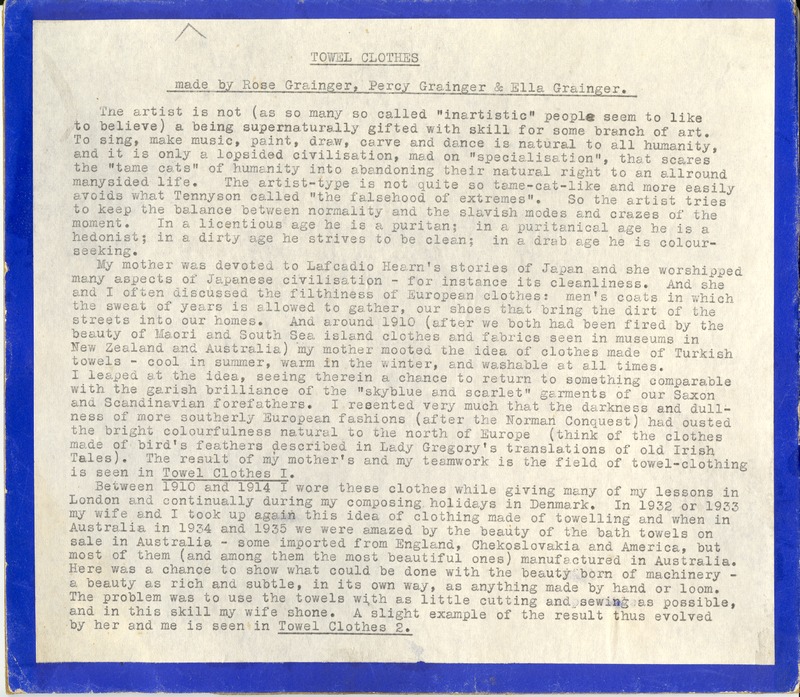 The towel clothes in the Grainger Museum are one of the highlights of the Costume Collection. Numbering 26 individual pieces or outfit, the towel clothes represent the Graingers’ innovative ideas and creativity in dress. Percy Grainger wrote about the towel clothes for the display in his Museum in the following terms:
“Towel clothes made by Rose Grainger, Percy Grainger and Ella Grainger.
The artist is not (as so many so called “inartistic” people seem to like to believe) a being supernaturally gifted with skill for some branch of art. To sing, make music, paint, draw, carve and dance is natural to all humanity, and it is only a lopsided civilisation, made on “specialisation”, that scares the “tame cats” of humanity into abandoning their natural right to an allround manysided life. The artist-type is not quite so tam-cat-like and more easily avoids what Tennyson called “the falsehood of extremes”. So the artist tries to keep the balance between normality and the slavish modes and crazes of the moment. In a licentious age he is a puritan; in a puritanical age he is a hedonist; in a dirty age he strives to be clean; in a drab age he is colour-seeking.
My mother was devoted to Lafcadio Hearn’s stories of Japan and she worshipped many aspects of Japanese civilisation – for instance its cleanliness. And she and I often discussed the filthiness of European clothes: men’s coast in which the sweat of years is allowed to gather, our shoes that bring the dirt of the streets into our homes. And around 1910 (after we both had been fired by the beauty of Maori and South Sea island clothes and fabrics seen in museum in New Zealand and Australia) my mother mooted the idea of clothes made of Turkish towels – cool in summer, warm in the winter, and washable at all times. I leaped at the idea, seeing therein a chance to return to something comparable with the garish brilliance of the “skyblue and scarlet” garments of our Saxon and Scandinavian forefathers. I resented very much that the darkness and dullness of more southerly European fashions (after the Norman Conquest) had ousted the bright colourfulness natural to the north of Europe (think of the clothes made of bird’s feathers described in Lady Gregory’s translations of old Irish Tales). The result of my mother’s and my teamwork is the field of towel-clothing is seen in [this Grainger Museum display].
Between 1910 and 1914 I wore these clothes while giving many of my lessons in London and continually during my composing holiday in Denmark. In 1932 and 1933 my wife and I took up again this idea of clothing made of towelling and when in Australia in 1934 and 1935 we were amazed by the beauty of the bath towels on sale in Australia – some imported from England, Chekoslovakia [sic] and America, but most of them (and amont them the most beautiful ones) manufactured in Australia. Here was a chance to show what could be done with the beauty born of machinery – a beauty as rich and subtle, in its own way, as anything made by hand or loom. The problem was to use the towels with as little cutting and swing as possible, and in this skill my wife shone.”