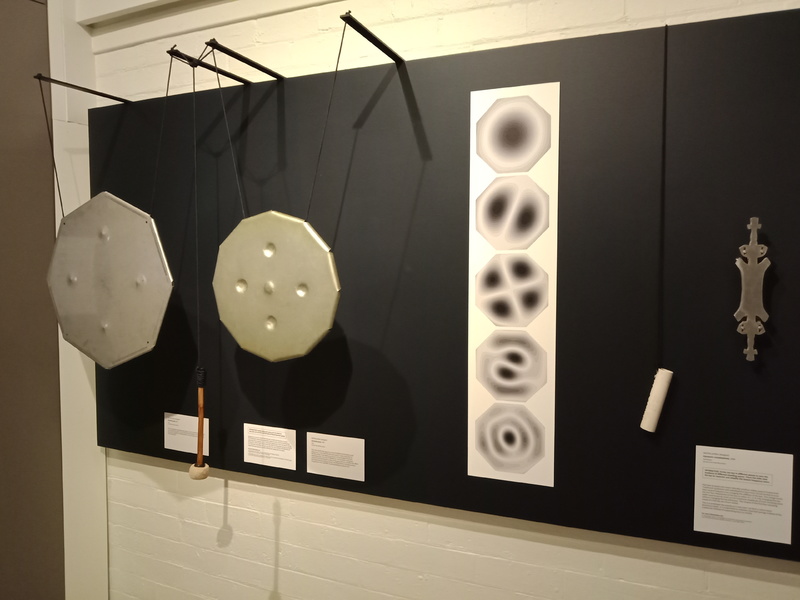 These are a suit of innovative instruments designed and created by Neil McLachlan. Neil McLachlan is an Associate Professor with the Melbourne School of Psychological Sciences at the University of Melbourne. Like Anton Hasell, his research and practice has continued to evolve since the Federation Bells project, across a great many areas of expertise including neuro-acoustics and gong design.

The suite of instruments in this photograph include, from left to right:
Harmonic Gongs, 2009, 2014 (steel).
Left gong: The World’s first gong to produce multiple harmonically tuned frequencies. It was hand formed and tuned in 1.6mm mild steel by Dr Neil McLachlan in the Melbourne School of Psychological Sciences workshop at the University of Melbourne in 2009. The harmonic tuning was achieved by tensioning the surface of the gong with four dimples that affect the frequencies of variously shaped standing waves in the gong surface. The gong was then ‘pacified’ by electroplating to prevent rust.

Right gong: A production prototype gong made in 1.6mm stainless steel in 2014. The gong was tuned by Dr McLachlan using a purpose-built computer controlled 2-tonne press that is capable of creating dimples at 50 micrometre accuracy to allow mass production.
Gongs are revered in South East Asia just as bells are revered in Europe. The traditional Indonesian ensembles called Gamelan feature tuned gongs spanning many octaves. Since Indonesian gongs don’t have harmonic tuning, Europeans need to learn how to hear the pitch of Indonesian gongs by playing in a Gamelan ensemble. But you can hear the clear pitches and harmony of these harmonic gongs by gently striking each gong near its centre.

The Harmonic Metallophone, 2009 (aluminium): Flat bars of wood and metal naturally produce widely spaced frequencies. Traditional xylophone and metallophone keys have carved arches to tune their 2nd frequency by changing the stiffness of the key. This design tunes the first 4 frequencies of the key to ratios of 1: 2: 4: 6 by changing the key width (and hence it’s mass) at the maximum amplitude of each standing wave without changing the key thickness. The shapes of the first four standing waves of a flat bar are shown below. This is a prototype key exactly as it was laser cut from a 10mm thick aluminium plate. It is suspended on stainless steel leaf springs instead of the traditional method of suspending keys by chords.

Photograph by the Grainger Museum

Photographed in the Grainger Museum 2019