The Aims of the Grainger Museum 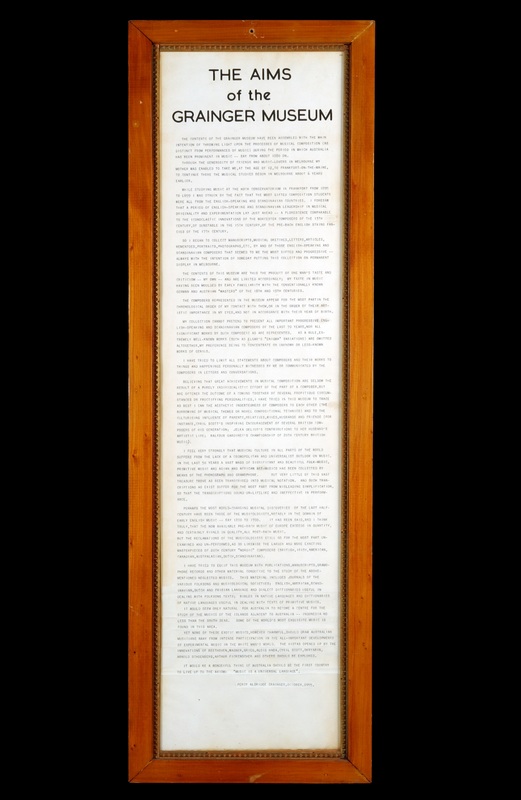 The Aims of the Grainger Museum

An essay written by Percy Grainger on his goals and intentions for the museum. Grainger created a display "Legend" of this content, typed out and framed, for exhibition in the Grainger Museum, University of Melbourne.

Text reads:
"The contents of the Grainger Museum have been assembled with the main intention of throwing light upon the processes of musical composition (as distinct from performances of music) during the period in which Australia has been prominent in music—say from about 1880 on.

Through the generosity of friends and music-lovers in Melbourne my mother was enabled to take me, at the age of 12, to Frankfort-on-the-Maine, to continue there the musical studies begun in Melbourne about 6 years earlier. While studying music at the Hoch Conservatorium in Frankfurt from 1895 to 1899 I was struck by the fact that the most gifted composition students were all from the English-speaking and Scandinavian countries. I foresaw that a period of English-speaking and Scandinavian leadership in musical originality and experimentation lay just ahead—a florescence comparable to the iconoclastic innovations of the Worcester composers of the 13th century, of Dunstable in the 15th century, of the pre-Bach English string fancies of the 17th century.

So I began to collect manuscripts, musical sketches, letters, articles, mementos, portraits, photographs, etc., by and of those English-speaking and Scandinavian composers that seemed to me the most gifted and progressive—always with the intention of some day putting this collection on permanent display in Melbourne.

The contents of this Museum are thus the product of one man’s taste and criticism—my own—and are limited accordingly; my taste in music having been moulded by early familiarity with the conventionally known German and Austrian “masters” of the 18th and 19th centuries.

The composers represented in the Museum appear for the most part in the chronological order of my contact with them, or in the order of their artistic importance in my eyes, and not in accordance with their year of birth.
My collection cannot pretend to present all important progressive English-speaking and Scandinavian composers of the last 70 years, nor all significant works by such composers as are represented. As a rule, extremely well-known works (such as Elgar’s “Enigma” Variations) are omitted altogether, my preference being to concentrate on unknown or less-known works of
genius.

I have tried to limit all statements about composers and their works to things and happenings personally witnessed by me or communicated by the composers in letters and conversations.

Believing that great achievements in musical composition are seldom the result of a purely individualistic effort on the part of a composer, but are oftener the outcome of a coming-together of several propitious circumstances orfructifying personalities, I have tried in this Museum to trace as best I can the aesthetic indebtedness of composers to each other (the borrowing of musical themes or novel compositional techniques) and to the culturizing influence of parents, relatives, wives, husbands and friends (for instance, Cyril Scott’s inspiring encouragement of several British composers of his generation; Jelka Delius’s contributions to her husband’s artistic life; Balfour Gardiner’s championship of 20th century British music).

I feel very strongly that the musical culture in all parts of the world suffers from the lack of a cosmopolitan and universalist outlook on music. In the last 50 years a vast mass of significant and beautiful folk music, primitive music, and Asian and African art-musics has been collected by means of the phonograph and gramophone. But very little of this vast treasure trove has been transcribed into musical notation. And such transcriptions as exist suffer for the most part from misleading simplification, so that the transcriptions sound un-life like and ineffective in performance.

Perhaps the most world-changing musical discoveries of the last half-century have been those musicologists, notably in the domain of early English music—say 1200 to 1700. It has been said, and I think truly, that the now-available pre-Bach music of Europe exceeds in quantity, and certainly rivals in quality, all post-Bach music. But the reclamations of the musicologists still go for the most part unexamined and unperformed, as do likewise the larger and more
exacting masterpieces of the 20th century “Nordic” composers (British, Irish, American, Canadian, Australasian, Dutch and Scandinavian).

I have tried to equip this Museum with publications, manuscripts, gramophone records and other material conducive to the study of the abovementioned neglected musics. This material includes journals of the various folk-song and musicological societies: English, American, Scandinavian, Dutch, and Frisian languages and dialect dictionaries useful in dealing with folk-song texts; Bibles in native languages and dictionaries in native languages, useful in dealing with texts of primitive musics.

It would seem only natural for Australia to become a centre for the study of musics of the islands adjacent to Australia—Indonesia no less than the South Seas. Some of the world’s most exquisite music is found in this area.

Yet none of these exotic musics, however charmful, should draw Australian musicians away from intense participation in the all-important developments of experimental music in the white man’s world. The vistas opened up by the innovations of Beethoven, Wagner, Grieg, Alois Haba, Cyril Scott, Scriabin, Arnold Schoenberg, Arthur Fickenscher and others, should be explored. It would be a wonderful thing if Australia should be the first country to live to the axiom: “Music is a universal language”.