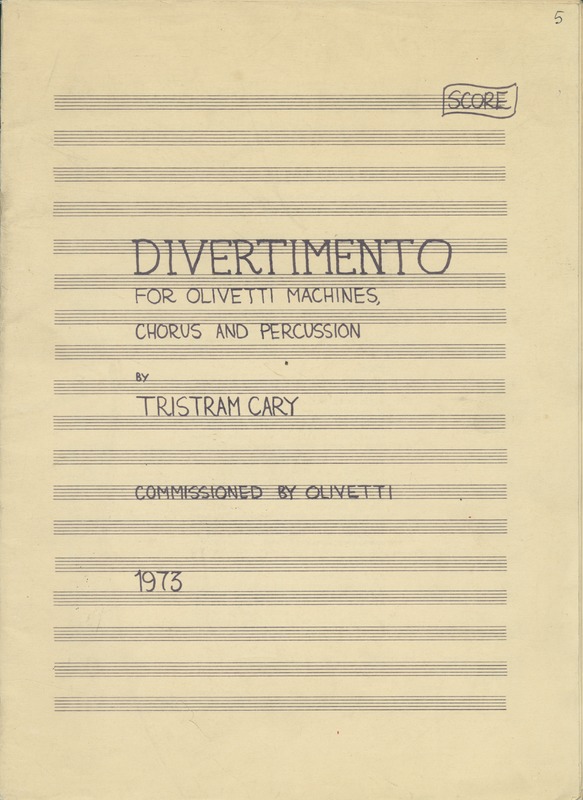 Divertimento is an example of British composer Tristram Cary’s combination of electronic compositional techniques, including recorded sound, electronic sounds, and traditional acoustic sound in live performance. Cary wrote of this piece: “In 1973 the huge Italian business machine manufacturer Olivetti (headquarters in Milan) planned a grand opening for their new training centre at Haslemere, Surrey... Since they wanted an unmistakable Olivetti element in the concert, I was commissioned to write a piece incorporating the sounds of their business machines, which ranged from small typewriters to large and noisy machines for various purposes.” Cary gathered the sounds in Olivetti's London showroom with a Nagra tape recorder, a mixer and microphones. He then transformed the machine noises with his electronic equipment at his private studio, including softening the sounds, and using them both at normal speed and considerably slowed down.

Cary came to Australia to live in the following year. He made a short version of the piece (without voices) called Tracks from Divertimento, for use on a LP record of new Australian computer music. This LP, Full Spectrum (1978), is seen here in this display. Full Spectrum included a realisation of Grainger’s Free Music made on the Music V system at the Conservatorium of Music, University of Melbourne, two years after Les Craythorn first realised the score on the EMS Synthi 100.