A Copy of Verses on the Awful Execution of Charles Christopher Robinson, For the Murder of his Sweetheart, Harriet Segar, of Ablow Street, Wolverhampton, August 26th.

A Copy of Verses on the Awful Execution of Charles Christopher Robinson, For the Murder of his Sweetheart, Harriet Segar, of Ablow Street, Wolverhampton, August 26th.

"EXECUTION AT STAFFORD.—Charles Christopher Robinson was executed on Tuesday morning in front of the county gaol at Stafford, in presence of 4,000 spectators. Before his death he acknowledged the justice of his sentence. On the scaffold he exclaimed, “Lord Jesus, receive my spirit.” His death was not instantaneous. He made a statement to the chaplain, but wished it to be kept from the public. Robinson would have been 19 next May. His victim was somewhat older, but she would have been only in her 19th year. They had for a long time been affianced, and lived together in the house in which the murder was committed. The facts of the murder may be briefly told. On the afternoon of Saturday, the 26th of August, Mr. and Mrs. Fisher went out for a drive into the country, leaving Robinson and Harriet Seager alone in the house, with a young man named Wilson, a companion of Robinson, in the garden. During the afternoon the girl was seen by a servant girl of Mr. Fisher’s brother, who had gone to the house on an errand, crying as she stood cleaning knives in the brewhouse. Robinson at the time stood leaning against the door. Shortly afterwards a nephew of Mr. Fisher, a little boy, saw Robinson strike Seagar (sic) with his open hand in her face because she would not allow him to kiss her. The young man alluded to left about 4 o’clock, and Robinson, who had been shooting sparrows with him in the garden with a small gun, went into the house. About a quarter-past 4 the neighbours were alarmed by a cry that Robinson had shot Harriet, and upon entering the brewhouse the poor girl was found lying dead on the floor in a pool of blood, with her throat cut. At the time the neighbours entered the house Robinson was observed coming down stairs, with an open razor in his hand. He was then in his shirt sleeves, for he had not washed or dressed himself during the day. He went into the scullery where his victim lay dead on the floor, and, standing in front of a looking-glass that was hanging upon the wall, he deliberately cut his throat three times with the razor. At this juncture he was secured, a surgeon was sent for, and his self-inflicted wounds were sewn up after some resistance on his part. The defence upon the trial, however, was, first, that Seager had committed suicide, and that the prisoner in grief attempted his own life; and next, that he was insane when he committed the murder, insanity being hereditary in his family, as was shown by the fact of his half-sister being then in a lunatic asylum. It could not, however, be shown that he was insane either before or after the murder. The executioner was a man named Smith, of Dudley, who has for some years performed the duties of hangman at Stafford."

Come all you feeling Christians,
Give ear unto my tale,
It's for a cruel murder
I was hung at Stafford Gaol.
The horrid crime that I have done
Is shocking for to hear,
I murdered one I once did love,
Harriet Segar dear.

Charles Robinson it is my name,
With sorrow was oppressed,
The very thought of what I've done
Deprived me of my rest:
Within the walls of Stafford Gaol,
In bitter grief did cry,
And every moment seemed to say
"Poor soul prepare to die!"

I well deserve my wretched fate,
No one can pity me,
To think that I in my cold blood,
Could take her life away,
She no harm to me had done,
How could I serve her so?
No one my feelings now can tell,
My heart was full of woe.

O Satan, Thou Demon strong,
Why didst thou on me bind?
O why did I allow they chains
To enwrap my feeble mind?
Before my eyes she did appear
All others to excell,
And it was through jealousy,
I poor Harriet Segar killed.

May my end a warning be
Unto all mankind,
Think on my unhappy fate
And bear me in your mind.
Whether you be rich or poor
Your friends and sweethearts love,
And God will crown your fleeting days,
With blessings from above. 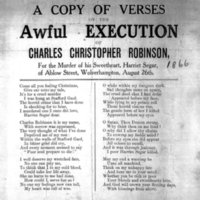 “A Copy of Verses on the Awful Execution of Charles Christopher Robinson, For the Murder of his Sweetheart, Harriet Segar, of Ablow Street, Wolverhampton, August 26th.,” Execution Ballads, accessed February 3, 2023, https://omeka.cloud.unimelb.edu.au/execution-ballads/items/show/1159.