Capt. WHITNEY's Confession: OR, HIS Penitent Lamentation, Under a Sence of a Guilty Conscience, on the Day of his Execution at the Porter's Block, near Smithfield-Bars, which was on the First of February, 1693.

Capt. WHITNEY's Confession: OR, HIS Penitent Lamentation, Under a Sence of a Guilty Conscience, on the Day of his Execution at the Porter's Block, near Smithfield-Bars, which was on the First of February, 1693.

James Whitney, a famous highwayman, is finally caught and executed for his many crimes. He is offered a reprieve if he names his accomplices, which he does, but the reprieve is never granted.

Account of Whitney's sentencing from the Old Bailey Online:
James Whitney , otherwise called Captain Whitney, Butcher , the great Highway-man, was a second time Indicted, together with Benjamin Kallow , Gent , for Robbing one John Smith at South-Mims-wash on the 10th of November last, of 100 yards of Lace, value 50 l. Neither of them made any Exceptions against the Jury; only Mr. Whitney desired none might be sworn amongst them, that were of the Hundred where the Robbery was done, which was granted by the Court; then the Witnesses were call'd and sworn for the King; The first was Mr. Smith, who said he was Robbed by seven Men, but he did not know them: The next Witness swore flatly against Mr. Whitney, that he Robbed him first, and afterward he went to Mr. Smith and Robbed him, and that he stob'd several Carriers Horses at the same time; but there was no Evidence could charge Kallow, so he was acquitted of this Indictment. Whitney being ask'd what he had to say for himself; answered in short, That he knew nothing of the Matter, and that the Man was hard-mouth'd. But was answer'd, That his mouth was soft enough to do his business. And could not prove where he was at that time, so he was found guilty of the Robbery.

T He fatal day is come at last,
of sorrow, grief, and shame,
Which will the fading glory blast,
of Whitney now by name.
My wicked life has been the cause
of this sad destiny;
For since I broke the Nation's laws,
'tis just that I should die.

Here to the world I freely leave
these lines, my last farewel;
And though I do not seem to grieve,
yet conscience, like a hell,
Does wrack and fill my soul with dread,
and does against me cry;
The wicked life which I have led,
makes me afraid to die.

The dreadful oaths which I have swore,
comes fresh into my mind,
When the Great God I come before,
shall I a pardon find?
Who did for sad damnation call,
when in my villany;
I under his displeasure fall,
which makes me fear to die.

'Tis true, a chearful countenance
I seeminly do bear,
But now my most unhappy chance,
drives me unto dispair;
Were conscience clear, what would I give,
all that I have, for why?
The thoughts of how I here did live,
makes me afraid to die.

I robb'd the roads both night and day,
young harlots to maintain,
From honest men I took away,
and gave it gills again;
Whom I lov'd better than a wife,
I cannot this deny;
Yet this perfidious wretched life,
makes me afraid to die.

With loaded pistol in my hand,
myself among the rest,
Would force the travellers to stand,
with pistols at their breast,
Their purses to give up with speed,
or soon the shot should flie;
To think of which my heart doth bleed,
I am afraid to die.

What though I suffer on a tree,
it is not that I fear;
But oh! what will become of me,
if God should be severe?
To me who all my days have spent
with thieves continually,
And ne'er did in the least repent,
therefore I fear to die.

My brother Holland , and the rest
are gone five days before,
While I in sorrow am opprest,
my heart is grieved sore;
This seems a second death to be,
and I in sorrow cry,
And hope you all will pitty me,
who now at last must die.

I sigh at my sad destiny,
my very heart does bleed:
Alas! why did they flatter me,
with hopes of being freed?
Why did they bring me a reprieve?
O tell me, tell me why?
Yet I at last the world must leave,
and be compell'd to die.

Farewel thou world, I must imbrace
the bitter pangs of death,
And here in shame and sad disgrace,
surrender up my breath;
For which this day I hither came,
so sad's my destiny;
And tho' I startle at the same,
'tis just that I should die.

'Whitney'  in Lives and Exploits of the Most Noted Highwaymen, Robbers and Murderers of All Nations, Drawn from the Most Authentic Sources and Brought Down to the Present Time, by Charles Whitehead

From executedtoday.com: Dapper highwayman James Whitney was hanged at Smithfield on December 19th 1694. A monument to the allures and the perils of a midlife career change, Whitney threw over a tiresome life as the proprietor of an inn in Cheshunt, Hertfordshire,* purchased with his liquidation the accoutrements of the gentleman thief, and took to the road.

“Captain” Whitney — he had no right to the rank he appropriated for himself — was one of those stickup men who greatly esteemed the pose of honor associated with his new calling. On one occasion, he relieved a gentleman traveler of a large sack of silver on Newmarket Heath, but when his victim pleaded the length of his journey Whitney opened the bag to its former owner with an invitation to take what he would need.

The man plunged his hands in and hauled out as much as they would carry, leading Whitney to remark with a smile, “I thought you would have had more conscience, sir.”

In another fine caper (there are more of them assembled here) Whitney told a man to stand and deliver, only to have the traveler reply that he was about to say the same back to him. The two robbers laughed at their encounter and went their separate ways, but Whitney later chanced to turn up at the same inn as his so-called brother plunderer and overhear him regaling his fellows with the tale of having outwitted a highwayman by pretending to be one of the same profession.

Whitney stalked the man and a companion out of the hostel the next morning and this time robbed them successfully: “You should have kept your secret a little longer, and not have boasted so soon of having outwitted a thief. There is now nothing for you but to deliver or die!” Nobody likes your stories anyway, you blowhard.

True, James Whitney ended his adventure at the gallows: death is the fate of us all. From his day to ours, folk toiling away the ceaseless lonesome days between ashes and ashes have understood the soul’s stirring to exalt their scant mortal hours with deeds of valor and romance and derring-do. And as Whitney himself is said to have remarked to a miser whose lucre he was seizing, “Is it not more generous to take a man’s money from him bravely, than to grind him to death by exacting eight or ten per cent, under cover of serving him?”**

Nobody knows any of James Whitney’s peers in the publican guild, but as Captain Whitney he joined England’s most legendary gentleman outlaw in verse:
When Claude du Val was in Newgate thrown,
He carved his name on the dungeon stone;
Quoth a dubsman, who gazed on the shattered wall,
“You have carved your epitaph, Claude du Val,

Du Val was hanged, and the next who came
On the selfsame stone inscribed his name;
“Aha!” quoth the dubsman, with devilish glee,
“Tom Waters, your doom is the triple tree!”

Within that dungeon lay Captain Bew,
Rumbold and Whitney — a jolly crew!
All carved their names on the stone, and all
Share the fate of the brave Du Val!

Full twenty highwaymen blithe and bold,
Rattled their chains in that dungeon old:
Of all that number there ‘scaped not one
Who carved his name on the Newgate Stone.

* The George Inn. A map search does yield a The George in Cheshunt; whether this is actually the same facility where our famous highwayman once earned a lawful keep, I have not been able to establish. 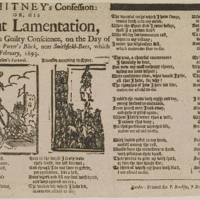 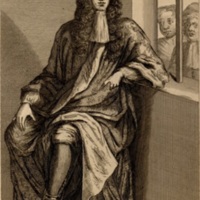 “Capt. WHITNEY's Confession: OR, HIS Penitent Lamentation, Under a Sence of a Guilty Conscience, on the Day of his Execution at the Porter's Block, near Smithfield-Bars, which was on the First of February, 1693.,” Execution Ballads, accessed January 21, 2022, https://omeka.cloud.unimelb.edu.au/execution-ballads/items/show/1158.