OR, A True Account of the Barbarous and Horrid Murther committed on the Body of Mary Cox, late Servant in Woodstreet LONDON.

Grim King of the Ghosts

Assist me some mournful Muse,
while I a sad Story relate;
Let all that these Lines peruse,
lament a poor maids hard fate;
Who Guiltless and Innocent fell,
by the hands of a barbarous Dame:
As fierce as a fury of Hell,
her sexes eternal shame.

Her husband to Bristol went,
his Trade to advance at the fair:
Whilst she was on mischief bent,
such mischief she can't repair:
for suspition o're clouding her mind,
bred a tempest within her breast:
her soul like a sea with rough wind,
was ruffled and rob'd of rest.

ALl jealous she taxed her maid,
and falsly did her accuse,
With theft she did her upbraid,
and shamefully did abuse:
While the maid in her own defence, undaunted and boldly stood,
Which made the fierce Dame commence,
a Tragedy full of Blood.

she caus'd her to be fast bound
to the post of her husbands bed,
where she did her body wound,
and whipped her almost dead:
thus did she a Confession extort,
of Crimes which the Maid never knew,
tormenting her in such a sort,
as wou'd make ones heart for to rue.

This monster not satisfied yet,
tho' the blood run from every part,
Made an Iron red hot in a pet,
resolving to give her more smart,
she burnt her in shoulders and thighs,
and sev'ral times under her ears,
she wou'd not come near her Eyes,
lest th'iron shou'd be quench'd with her tears.

Her body was blister'd and whail'd,
she was burnt from the head to the heel,
her skin was so parch'd that it scal'd,
no pain like to what she did feel:
she kept in her Chamber three days, unwilling the fact shou'd be known,
And turn to her Masters dispraise,
if her cruel stripes shou'd be shown.

As soon as down stairs she came,
her Mistress was in the old mood,
The merciless savage Dame,
did thirst for her very heart's blood:
she caus'd her two Prentices then,
neck and heels the poor Creature to bind,
No tigress within her Den,
e're shew'd a more savage mind.

She kick'd her and spurn'd her about,
and bid the young Lad do the same:
Resolving to act her part out,
thus ended the tragical game,
she catch'd up a hammer in haste,
and pierc'd the maids brains at a blow,
for which, of the hemp she must taste,
old Tyburn must have her I trow.

Printed for W. Thackeray at the Angel in Duck-Lane; J. Millet at the Angel in Little-Britain; and Alex. Milbourn at the Stationers-Arms in Green-Arbour-Court in the Little-Old-Baily. Where any Chapman may be Furnished with all Sorts of Small BOOKS

From The Proceedings of the Old Bailey Online: London's Central Criminal Court, 1674 to 1913

Elizabeth Deacon , Wife of Francis Deacon , of the Parish of St. Michael Woodstreet Whipmaker, was arraigned and tried for the murther of her Servant maid one Mary Cox , aged about 17 years . The Tryal lasted very long, and abundance of Witnesses were called for the King, amongst which were two Apprentices, viz. Edward Newhall , and Thomas Albrook , &c. The former of which declared, that, on Monday the 20th of January last, his Mistris found the Maid to have a Shilling about her, and demanded how she came by it? The Maid confest at first, that she had one 6d. of one Mrs. Baker, and the other of one Susannah Middleton ; which her Mistriss being doubtful of, she ty'd her to the Beds-post, and whipt her very sorely, and on Wednesday following she deny'd it. Upon which, her Mistriss grew extreamly enraged at her, and struck her two or three Blows with a Whip, and proceeded further in her passion, even in causing him to tye her to the Beds-post, where she whipt her in a most violent manner, until the cry'd out Murther. To prevent which, her Mistriss stopt her Mouth with her Hand, but then on the Saturday following, she tyed her Neck and Heels, and afterwards tyed her to the Beds post, burning her with the Fire-Poker upon the Neck, Shoulders, and Back, after a most inhuman manner, and then gave her a Blow on the Head with a Hammer, until she made her confess to have been confederate with some Thieves who intended to Rob her Master's House while he was at Bristol Fair. Then she had the Maid before a Justice on the next Monday, being the day before she dyed, where she confessed the like, &c.

After which, her Mistriss grew careless of her; For when she fell sick upon it, she would not let her have those Accommodations that were fit for a person in that deplorable Condition, but was heard to say, Hang her, Hang her; And that if she had not confest, she would have kill'd her. She could no ways be prevail'd upon to take any pity upon her Servant, nor give her any sustenance: But, on the contrary, cry'd out, Who can do any thing for such a Wretch? Telling them, that she had the Pox, &c. The Surgeon said, that the Stripes and Wounds did contribute towards her Death, together with a Surfeit she had taken before.

The prisoner strived to Extenuate her Crime, saying, That her Maid had wronged her several times, by making away her Goods, and Money, and had Conversation with a parcel of Thieves, and was a Girl of a very sullen, obstinate, temper; and the reason why she Whipt her, was, for opening her Dressing-Box. She called some Witnesses, who gave a favourable account of her former Education, but none that could contradict or invalidate the King's Evidence; only one of them said, that the Maid complained of a stoppage at her stomach, and a great pain in her head, before she was so used; and that she surfeited her self by eating Ice Cakes, and Apples, &c. all which did not avail her any thing; but the Jury looking upon the Heinousness of the Fact, brought in her guilty of wilful Murther.

*** The Tryals being over, the Court proceeded to give Sentence as followeth, viz. ... Received Sentence of Death Eleven. Richard Merridy, George Cox, William Harvey, Robert Hillgrave, John Anderson, (convicted about four sessions ago) Thomas Williams, Thomas Fox, John Longstaffe, Edward Richardson, Jane Smith, and Elizabeth Deacon, who pleading her Belly, a Jury of Matrons were Empannelled, whose Verdict was, that she was with quick Child. 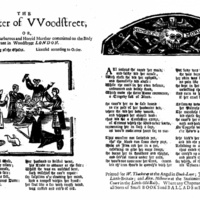