who was executed at Tyburn, near London for being concened in stealing an Heirres.

Capt. Johnstons last farewell who was arraigned for being assisting in the stealing a young heiress, for which he received sentance of death, and was accordingly executed at Tyburn, the 23d. of this instant December, 1690. To the tune of Russel's farewel.

YOU noble Lords of high Degree, That see my dismal Doom;
Have some Regard, and pitty me, Who now, alas! am come
To die an ignominious Death, As it doth will appear;
While I declare, with my last Breath, The Laws are most severe.

In Scotland I was breed and born, Of noble Parents there;
Good Education did adorn My Life, I do declare:
No Crime did eer my Consciance stain, Till I adventurd here;
Thus have I Reason to complain, The Laws are most severe.

In Flanders I the French have facd, And likewise in Ireland
Still eagerly persued the Chase, With valiant Heart and Hand:
Why was I not in Battle slain; Rather then suffer here,
A Death, which Mortals do disdain, The Laws are most severe.

I did no Hurt, nor any Wrong, I solemnly protest;
But merely for to serve my Friend, I granted his Request;
To free his Lady out of Thrall, His Joy and only Dear;
And now my Life must pay for all, The Laws are most severe.

I coming from my Native Land, In this unhappy Time,
Alas! I did not understand The Nature of the Crime;
Therefore I soon did condescend, As it does well appear,
And find therein I did offend, The Laws are most severe.

In the same Lodging where I lay, And livd at Bed and Board,
My Landlord did my Life betray, For fifty Pounds reward;
Then being into Prison cast, Although with Conscience clear;
I was a arraigned at the last, The Laws are most severe.

The Lady will not hear my Moan, While dying Words I sent;
Her cruel Heart more hard than Stone, Would not the least relent;
But triumphing in my wretched State, As I die often here;
I fall here by the Hand of Fate, The Laws are most severe.

Will not my good and gracious King, Be merciful to me;
Is there not, in his Breast, a Spring, Of princely Clemency?
No, not for me, alas! I die, The Hour is drawing near,
To the last Minute I shall cry The Laws are most severe.

Farewel, dear Countrymen, said he, And this tumultuous Noise;
My Soul will soon transported be, To more Celestial Joys,
Tho in the Blossom of my Youth, Pale Death I do not fear;
For to the last, Ill speak the Truth, The Laws are most severe.

Alas! I have not long to live, And therefore now, said he,
All that wrongd me, I them forgive, As God shall pardon me:
My Landlord and subtle Wife, I do forgive them here;
Farewel, this transitory Life, The Laws are most severe.

Assisting to steal an Heiress

Newcastle upon Tyne: Printed and Sold by JOHN WHITE.

SIR JOHN JOHNSTON was born at Kirkcaldy, in Fifeshire. His father had had a good estate, but had diminished it by extravagant living, so Sir John went young into the army to improve his fortune. He went over to Ireland, where he thought to better his circumstances by marriage; and getting into the acquaintance of a Mr Magrath, in the county of Clare, he, by his urbane conversation, so gained his good opinion, that he frequently invited him to dinner. Mr Magrath having a daughter, with ten thousand pounds as her portion, Sir John took every opportunity to insinuate himself into her company, and so far gained upon her affections as to obtain her consent to elope with him; but the father, having some hints given him of their private courtship, kept a very watchful eye over their actions, and at last, being confirmed in his suspicions, forbade Sir John his house, and kept his daughter close.

Miss Magrath being uneasy under her confinement, and deprived of the company of Sir John, whom she loved to distraction, made a kinswoman her confidante, and entrusted her with a letter to Sir John, to let him know how uneasy her life was, and that if he would come to such a place, at a stated time, she would endeavour to make her escape, and meet him. But the lady, thinking she should gain most by obliging her uncle, delivered the letter to him, instead of Sir John. Mr Magrath, having read it, sealed it up again, and sent it to Sir John, who received it with a great deal of satisfaction, and immediately wrote an answer, and returned it by the same messenger. But, repairing to the place of rendezvous, instead of meeting the lady, he fell into an ambuscade of fellows with sticks and clubs, who beat him so unmercifully that he promised to relinquish his pursuit.

Having been in London some time, and spent his money, he was obliged to apply to some of his countrymen for support; and Captain James Campbell, brother of the Earl of Argyll, having a design to steal an heiress, one Miss Mary Wharton, he and Mr Montgomery were assistants in the affair. Miss Wharton was the daughter of Philip Wharton, Esq., and at the age of thirteen, by his death, inherited fifteen hundred pounds per annum, besides a personal property to the amount of one thousand pounds. This young lady resided with her mother in Great Queen Street, and Captain James Campbell, brother of the Earl of Argyll, wishing to possess so rich a prize, determined to marry her perforce, and for that purpose prevailed upon Sir John Johnston and Archibald Montgomery to assist him in conveying Miss Wharton from her home, which being done, and a reward of a hundred pounds offered for the apprehension of Captain Campbell, and fifty pounds a-piece for him and Mr Montgomery. Sir John, being betrayed by his landlord, was apprehended and indicted for it, the 11th of December, 1690.

The evidence was, in substance, that Miss Mary Wharton, being an heiress of considerable fortune, and under the care of her guardian (Mr Bierly), was decoyed out on the 10th of November, and being met with by Sir John Johnston, Captain Campbell and Mr Montgomery, in Queen Street, was forced into a coach with six horses (appointed to wait there by Captain Campbell) and carried to the coachman's house, and there married to Captain Campbell, against the consent of herself, or knowledge of her guardian. The jury having found the prisoner guilty, he received sentence of death.

The enterprise succeeded but too well to Johnston's cost. Campbell, who was the real culprit, escaped punishment, and married Margaret Leslie, daughter of David Lord Newark, after Parliament had dissolved his first marriage; but every effort to save Johnston proved ineffectual. Miss Wharton afterwards married Colonel Bierly, who commanded a regiment of horse in the service of William III.

At the place of execution, Sir John addressed the spectators in a long speech, in which he not only endeavoured to make it appear he was blameless in the transaction for which he suffered, but that he had been greatly wronged by printed papers, in which he was charged with a rape at Chester, and a similar crime at Utrecht, in Holland. He was executed at Tyburn, the 23rd of December, 1690. 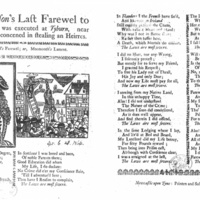