Sir Hugh in the Grimes Downfall.

Sir Hugh in the Grimes Downfall.

OR A New Song made on Sir Hugh in the Grime, who was Hang'd for stealing the Bishops Mare.

Sir Hugh in the Grime (Hughie Graeme or Graham) stole a mare from the Bishop of Carlisle, by way of retaliation for the Bishop's seduction of his wife. He was pursued by Lord Scroop, taken, and conveyed to Carlisle and hanged.

Scott suggested that Hugh Graham may have been one of four hundred Borderers accused to the Bishop of Carlisle of various murders and thefts about 1548.

GOOD Lord John is a hunting gone,
Over the Hills and Dales so far,
For to take Sir Hugh in the Grime.
For stealing of the Bishops mare

He derry derry down

Hugh in the Grime was taken then,
And Carried to Carlisle town;
the merry Women came out amain,
Saying the name of Grime shall never go down

O then a Jury of Women was brought,
Of the best that could be found
Eleven of them spoke all at once,
Saying the name of Grime shall never go down

he derry derry down

And then a Jury of men was brought,
More the pity for to be;
Eleven of them spoke all at once,
Saying Hugh in the Grime you are guilty etc

Hugh in the Grime was Cast to be hangd,
Many of his Friends did for him leet,
For 15 foot in the Prisin he did Jump,
With his hands tyed fast behind his back etc.

then bespoke our good lady Ward,
As she set on the Bench so high,
A peck of white pennys ill give to my lord
If hell grant Hugh Grime to me, he etc.

Hold your tongue now lady Ward,
And of Your talkitive let it be
there is never a Grime came in this Court
That at thy biding shall saved be,

then bespoke our good lady Moor,
As she sat on the Bench so high
A Yoke of Fat Oxen ill give to my lord
If hell grant Hugh Grime to me, etc.

Hold Your tongue now good lady Moor,
and of Your talkitive let it be,
there is never a Grime came to this Court,
that at thy biding shall saved be, etc.

Sir Hugh in the Grime lookd out of the door
With his hand out of the Bar,
there he spyd his Father dear
tearing of his Golden Hair. he derry, etc

Hold your Tongue good Father dear,
And of your weeping let it be
For if they hereave me of my life;
they cannot bereave me of the Heavens so high

Sir Hugh in the Grime lookd out at the door
Oh! what a sorry heart had he
There spyd his Mother dear,
Weeping and wailing Oh! woe is me, etc.

Hold Your tongue now Mother dear
And of Your weeping let it be;
For if they bereave me of my life,
they cannot bereave me of Heavens Fee, etc.

Ill leave my Sword to Johnny Armstrong
That is made of Mettal so fine:
That when he comes to the Border side;
he may think of Hugh in the Grime. he derry etc

London: Printed and sold by L. How.

Hugh the Graeme
[1880:] There are two editions of [this song], one of which was supplied by Burns to The Scots Musical Museum. It was obtained by Burns from oral tradition in Ayrshire, but the poet touched up some of the stanzas, and added the third and the eighth [nos. 2 and 3 above]. The other copy was obtained by Scott from his friend Laidlaw, and was published in the Minstrelsy. There is a ballad entitled The Life and Death of Sir Hugh of the Grime in D'Urfey's Pills to Purge Melancholy, which contains practically the same story. The story upon which the ballad is supposed to be founded is a traditional one, and is to the effect that Aldridge, the Bishop of Carlisle, about 1560 seduced the wife of Hugh Graham, one of the chiefs of the Border, and Graham, unable to bring the prelate to justice, made a raid, and with other spoil carried off a fine mare belonging to Aldridge. He was pursued by Sir John Scroope, captured and brought back to Carlisle, where he was hanged for felony. All attempts to save his life failed, and popular tradition attributes the stubbornness of the Bishop to his desire to get rid of the chief obstacle of his guilty passion. The Bishop was no favourite, and hence probably the animus against him in the ballad; for, as a rule, the old ballad mongers were not very hard upon lawless lovers.

[In Burns' version,] Stirling, and not Carlisle, is made the scene of the execution [...]. It was for the Bishop's 'honour' that Hughie must die, the word honour perhaps suggesting that the Bishop's 'mare' had a meaning which may be easily conjectured. [The] ballad ends with the fierce dying words of Hughie

Tradition does not say whether these dying injunctions were fulfilled, but if they were not it may certainly be assumed that it was not out of want of disposition on the part of the Grahams to revenge the death of Hughie upon the Bishop. (Ord, Glasgow Weekly Herald, July 10)

[1964:] We do not know if Hugh Graeme, the border raider, is a figure of history or fiction. Several versions of the ballad set the scene of his plundering activities in the neighbourhood of Carlisle, and we are reminded that in 1548, complaints were laid to the Lord Bishop of Carlisle against more than four hundred freebooters and outlaws, of whom Hugh may have been one. The present version places the action further north, in the neighbourhood of 'Strievelin toun' (Stirling), but as with the Border versions, the sympathies are all with the bad-man and all against the authorities. Hugh was perhaps unusually well-favoured in having the Earl of Home's wife to speak up for him, though her intervention was fruitless.

The earliest printed form of the ballad appears - a little surprisingly, perhaps - in the compilation of mainly saucy songs known as Durfey's 'Pills to Purge Melancholy' (1720), but it was already quite an old song then. Once common, the ballad seems to have become very rare in tradition. Only one version is reported in the twentieth century, obtained by the diligent Scottish collector Gavin Greig from Mrs. Lyall of Skene, near Aberdeen. Mrs. Lyall's excellent Dorian tune is the one used here by Ewan MacColl. (Notes Ewan MacColl & A. L. Lloyd, 'English and Scottish Folk Ballads') 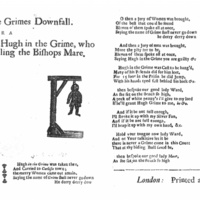