who was arraigned and found Guilty of wilfull Murther, and likewise many notorious Robberies; for which he received a due Sentance of Death, and was accordingly Executed on the 22d. of December, 1690 in Fleetstreet. To the Tune of The Rich Merchant-man. Licensed according to Order.

William Davies aka 'The Golden Farmer', a notorious highwayman is finally executed after 45 years of robbery, and is hanged in chains on Bagshot Heath, where he had committed many of his crimes.

Unto you all this day,
my faults I do declare,
Alas! I have not long to stay,
I must for Death prepare;

A most notorious Wretch,
I many years have been,
For which I now at length must stretch,
a just Reward for Sin:

No Tongue, nor Pen can tell
what Sorrows I conceive;
Your Golden Farmer's last Farewell,
unto the World I leave

I having run my Race,
I now at last do see,
That in much shame and sad disgrace,
my Life will ended be:

I took Delight to rob,
and rifle rich and poor,
But now at last, my Friend Old Mob,
I ne'er shall see thee more:

No Tongue nor Pen can tell;
what Sorrows I conceive;
Your Golden Farmer's last Farewell,
unto the World I leave.

A Gang of Robbers then
myself did entertain;
Notorious hardy Highway-men.
who did like Ruffians reign:

We'd rob, we'd laugh, and joke,
and revel night and day;
But now the knot of us is broke,
'tis I that leads the way:

No Tongue nor Pen can tell
what Sorrows I conceive,
Your Golden Farmer's last Farewell
unto the World I leave.

We Houses did beset,
and robb'd them night and day,
Making all Fish that came to Net,
for still we cleared the way;

Five Hundred Pounds and more,
in Money, Gold, and Plate,
From the right Owner we have bore,
but now my wretched State,

We always gagg'd and bound
most of the Family,
That we might search untill we found
their hidden Treasury;

Which if we could not find,
a Pistol cock'd streightway,
Presented at their Breast, to make
them shew us where it lay:

The Bloud which I have spilt,
now on my Conscience lies,
The heavy dreadfull thought of Guilt
my Senses do's surprize;

The thoughts of Death I fear,
although a just Reward,
As knowing that I must appear,
before the living Lord,

I solemnly declare,
who am to Justice brought,
All kind of wicked Sins that are,
I eagerly have wrought;

No Villains are more rife,
than those which I have bred;
And thus a most perfidious Life
I in this world have led:

Long have I liv'd you see,
by this unlawful Trade,
And at the length am brought to be
a just Example made:

Good God my Sins forgive,
whose Laws I did offend,
For here I may no longer live,
my Life is at an end:

No Tongue nor Pen can tell
what Sorrows I conceive;
Your Golden Farmer's last Farewell,
unto the World I leave.

William Davies (1627-1690) Born: 1627 in Wrexham, Denbighshire Highwayman Died: 22nd December 1690 at Westminster, Middlesex William Davies was a famous highwayman, known as the 'Golden Farmer,' from his habitually paying with gold coin to avoid identification of his plunder. It is said he often left his victims keep their jewels and other valuables.

He was born at Wrexham in Denbighshire in 1627, but removed in early life to Sudbury in Gloucestershire, where he married the daughter of a wealthy innkeeper and had, by her, eighteen children. He moved his family to Bagshot on the Surrey-Berkshire border where he became a successful farmer until the last month of his life, but used this trade as a mere cloak. For he had early taken to the road and robbed persons returning from cattle fairs or travelling to pay rent, mainly on Bagshot Heath but also as far afield as Salisbury Plain. He was dexterous in gaining information and his character was above suspicion.

Initially operating alone, Davies became a master of disguise and, at one time, robbed his own landlord of the annual rent money just collected from him. He later became the captain and leader of a large gang, among whom was Thomas Sympson, alias 'Old Mobb,' born at Romsey in Hampshire, who robbed for forty-five years with no other companion than the 'Golden Farmer.' Davies robbed the Duchess of Albemarle in her coach on Salisbury Plain, after a single-handed victory over her postilion, coachman and two footmen. He took three diamond rings and a gold watch, besides reproaching her for painting her face and being niggardly. Between Gloucester and Worcester, he robbed Sir Thomas Day of £60, after enticing him into a declaration that the county would make good any money lost on the highway if "betwixt sun and sun".

Davies had begun this career as an experiment, after the King's death in 1649, when twenty-two years old. He gained something of a Robin-Hood reputation over the years, with some of his haul finding its way under the doors of local poor families. However, his wife never had any suspicion of his illegal activities and, in all the ordinary relations of life, he was eminently respectable. His charming manners enabled him to secure the fidelity of accomplices and attract the confidence of his victims.

The ‘Golden Farmer’ retired from his profession for a few years, but was tempted back to the highway, in hope of making up a large sum for the purchase of land adjacent to his property. He had fallen out of practice and was recognised. Soon afterwards, he was discovered in Salisbury Court in Fleet Street (Westminster) which was, at that time, a kind of sanctuary. He had a narrow escape and shot a pursuing butcher. Being apprehended, he was committed to Newgate Prison, tried for the murder at the Old Bailey Sessions of 11th-17th December 1690 and his previous crimes became known. He was condemned to be hanged at the end of Salisbury Court (instead of Tyburn, as usual), where he had shot the butcher. He died on 22nd December 1690, in the sixty-fourth year of his age, and was afterwards hung in chains on Bagshot Heath. Some say this was adjoining the old pub in Easthampstead that he used to frequent, now the site of a modern replacement known as the ‘Golden Farmer’. He had left affectionate messages for 'Old Mobb,' who was suspected of having betrayed him. Mobb was hanged at Tyburn on Friday 30th May 1691.

According to George Daniel of Canonbury, the 'Golden Farmer' had been a corn-chandler in Thames Street, selling by day and despoiling the farmers at night. The contemporary ballad, his 'Last Farewell,' admits his close connection with 'a gang of robbers, notorious hardy highwaymen who did like ruffians reign;' also with housebreakers and burglars, clearing £500. one time, in money and plate. 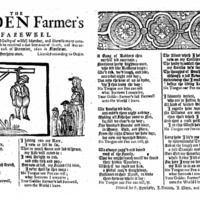