Frederick Baker murders the 8-year-old Fanny Adams and chops her corpse into many pieces.

You tender mothers pray give attention
To these few lines I will now relate;
From a dreary cell, now to you I'll mention
A wicked murderer now has met his fate.
This villain's name it is Frederick Baker
His trial is over and his time has come,
On the gallows high he has met his maker
To answer for that cruel deed he'd done.

cho: Prepare for death, wicked Frederick Baker,
For on the scaffold you will shortly die,
Your victim waits for you to meet your maker;
She dwells with angels and her God on high

On that Saturday little Fanny Adams
Near the hop-garden with her sister played,
With hearts so light, they were filled with gladness,
When that monster, Baker, towards them strayed;
In that heart of stone not a spark of pity
As he those halfpence to the children gave,
But now in gaol in Winchester city
He soon will die and fill a murderer's grave.

He told those children to go and leave him
With little Fanny at the garden gate.
He said, "Come with me," and she, believing
In his arms he lifted her as now I state.
"O do not take me, my mother wants me,
I must go home again please sir," she cried,
But on this earth she never saw them,
For in that hop-garden there, the poor girl died.

When the deed was done and that little darling
Her soul to God her Maker it had flown,
She could not return to her mother's bidding
He mutilated her, it is well known.
Her heart-broken parents in anguish weeping
For vengeance on her murderer cried,
Her mother wrings her hands in sorrow
O would for you, Dear Fanny, I had died.


The jury soon found this monster guilty,
The judge on him this awful sentence passed:
Saying, "Prepare yourself, for the cruel murder
You have committed, your die is cast.
And from your cell you will mount the scaffold,
And many thousands will you behold,
You will die the death of a cruel murderer,
And may the Lord have mercy on your soul!

What visions now must haunt his pillow
As in hls cell he does lie the while?
She calls to him, "O you wicked murderer
'Tis I your victim calls, that litile child!
The hangman comes; hark the bell is tolling
Your time has come, you cannot be saved,
He mounts the scaffold and the drop is falling
And Frederick Baker fills a murderer's grave.

The true story of Sweet Fanny Adams
From Murderpedia.org

Few people who use the expression 'Sweet Fanny Adams' know of its origin. However there was a time when it would have been recognised instantly.

When the name Fanny Adams made sensational headlines, creating a wave of horror, revulsion and pity. Little Fanny Adams was brutally murdered on Saturday 24 August 1867. Nothing much ever happened to disturb the rural Hampshire community of Alton: certainly none of the inhabitants could recall a local murder during their lifetime. So Fanny's mother, Harriet Adams, probably thought it quite safe for three small children to wander off alone towards Flood Meadow, just 400 yards from their home in Tan House Lane.

Fanny and her friend, Minnie Warner, both eight years old, set off up the lane with Fanny's seven-year-old sister Lizzie and they were approached by a man dressed in black frock coat, light waistcoat and trousers. Despite his respectable appearance he had obviously been drinking, and the proposition he put to the children remains chillingly familiar to today's police officers.

He offered Minnie three halfpence to go off and spend with Lizzie, while Fanny could have a halfpenny if she alone would accompany him up The Hollow, an old road leading to the nearby village of Shalden. Fanny took her halfpenny but refused to go with him, whereupon he picked her up and carried her into a nearby hopfield, out of sight of the other children. It was then almost 1.30pm.

At about five o'clock, having played together since Fanny's abduction, Minnie Warner and Lizzie Adams made their way home. Seeing them return, a neighbour, Mrs Gardiner, asked where Fanny was, then rushed to tell Mrs Adams when the children had explained what had happened. The anxious women hurried up the lane, where they met the same man coming from the direction of The Hollow.

Mrs Gardiner accosted him: "What have you done with the child?" "Nothing", he replied equably, maintaining this composure as he answered Mrs Gardiner's other questions. "Yes, he had given them money, but only to buy sweets which I often do to children", and Fanny, unharmed, had left him to rejoin the others. His air of respectability impressed the women and when he told them that he was a clerk of a local solicitor William Clement, they allowed him to leave.

However, at seven o'clock, with the child still missing, worried neighbours formed a search party. They found poor Fanny's dreadfully mutilated remains in the hopfield. It was a sickening scene of carnage. The child's severed head lay on two poles, deeply slashed from mouth to ear and across the left temple. Her right ear had been cut off. Most horribly, both eyes were missing. Nearby lay a leg and a thigh.

A wider search revealed her dismembered torso: the entire contents of chest and pelvis had been torn out and scattered, with some internal organs even further slashed or mutilated. So savage was the butchery that other parts of her body were recovered only after extensive searches over several days. Her eyes were found in the River Wey.

On hearing of her daughters death, the distraught Mrs Adams ran to tell her husband (who was playing cricket on the Butts, South of the Town) then collapsed from grief and exhaustion. George Adams reacted to the news by returning home for his shotgun, and setting out for the hopfields in search of the murderer. Fortunately for both, neighbours disarmed him.

Later that evening, Supt William Cheyney arrested the obvious suspect at his workplace, the solicitor's office in Alton High Street. "I know nothing about it," said 29-year-old Frederick Baker in the first of many protestations of innocence, before Cheyney escorted him through an angry crowd to Alton Police Station.

The wristbands of Baker's shirt and his trousers were spotted with blood. His boots, socks and trouser bottoms were wet. "That won't hang me, will it?" he said nonchalantly, explaining that it was his habit to step into the water when out walking. But he could not explain how his clothing came to be bloodstained. More evidence - two small knives, one of them stained with blood - came to light when he was searched.

The suspect was locked away while Supt Cheyney checked on his movements that afternoon. Witnesses confirmed that he had left the solicitors office shortly after 1pm, returning at 3.25pm, he again went out until 5.30pm. Mrs Gardiner and Mrs Adams had seen him coming from the direction of the hopfield some time after 5pm: if, as seems likely, he had murdered Fanny Adams during his first absence, had he returned to commit further depredations on his victim's body?

Baker's fellow Clerk, Maurice Biddle, spoke of seeing him in the office at about six that evening, when he had described his meeting with Mrs Adams and Mrs Gardiner. Baker had seemed disturbed, "it will be very awkward for me if the child is murdered", he told Biddle.

Later they went over to the Swan for a drink where the morose Baker said he might leave town on the following Monday. To his colleague's observation that perhaps he would have difficulty in finding a new job, Baker made the significant reply, "I could go as a butcher".

On the following Monday, whilst searching Baker's office desk, Cheyney found his diary. It contained a damning entry which the suspect admitted writing shortly before his arrest. "24th August, Saturday - killed a young girl. It was fine and hot". At his trial Baker maintained that this entry, written when he was drunk, simply meant that he was aware a girl had been murdered.

Meanwhile, a local painter William Walker had found a large stone in the hopfield, with blood, long hair and a small piece of flesh adhering to it.

This, pronounced Dr Louis Leslie, the Alton divisional police surgeon, was probably the murder weapon; his post-mortem finding was that death had been caused by a crushing blow to Fanny's head.

Tuesday evening saw the inquest before Deputy County Coroner Robert Harfield at the Duke's Head Inn. After viewing the gruesome remains, hearing the evidence and the handcuffed prisoners reply when the coroner asked if he wished to say anything ("No Sir - only that I am innocent"), the jury returned a verdict "wilful murder against Frederick Baker for killing and slaying Fanny Adams". He was remanded to Winchester Prison to await the formal committal hearing.

This was held at Alton Town Hall on Thursday 29 August before local magistrates. Still protesting his innocence, the prisoner was committed for trial at the next County Assizes. A large crowd awaited his removal from the Town Hall and the Police were only able to protect him from the violence of the mob with great difficulty. Baker's trial opened at Winchester Assizes on 5 December.

Little Minnie Warner was carried into court to testify; the defence strongly challenged her identification of Baker and also claimed (perhaps correctly) that it was impossible for his small knives to have dismembered the unfortunate Fanny so thoroughly. But the defence case centred on Baker's mental state, a sad tale of hereditary insanity.

His father had "shown an inclination to assault even to kill, his children"; a cousin had been in asylums four times; brain fever had caused his sister's death; and he had attempted suicide after an abortive love affair.

Apparently unimpressed, the jury rejected Mr Justice Mellor's judicial advice that they might consider the prisoner irresponsible for his actions through insanity, possibly the inevitable verdict today.

After retiring for only 15 minutes the jury returned a guilty verdict, and Frederick Baker was hanged before a crowd of 5000, a large proportion of whom consisted of women, in front of Winchester's County Prison at 8am on Christmas Eve, 1867.

Following the execution it became known that Baker had written to the parents of the murdered child to express deep sorrow over the crime that he had committed "in an unguarded hour and not with malice aforethought". He earnestly sought their forgiveness adding that he was "enraged at her crying, but it was done without any pain or struggle". The prisoner denied most emphatically that he had violated the child, or had attempted to do so.

Poor Fanny's headstone which was erected by Public subscription and renovated a few years ago, is pictured here with her younger sister and Minnie Warner, and still stands in the town cemetery on the Old Odiham Road. It might have been our only reminder of the tragic affair had it not been for the macabre humour of British Sailors.

Served with tins of mutton as the latest shipboard convenience food in 1869, they gloomily declared that their butchered contents must surely be 'Sweet Fanny Adams'. Gradually accepted throughout the armed services as a euphemism for 'sweet nothing' it passed into common usage.

As an aside, the large tins in which the meat was packed for the royal navy, were often used as mess tins and it appears that even today mess tins are colloquially known as 'fannys'. 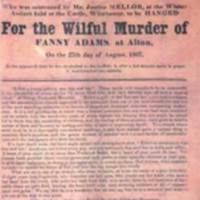 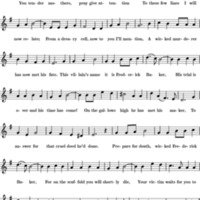