Execution of the Purfleet murderer at Springfield gaol

Execution of the Purfleet murderer at Springfield gaol

Richard Coates, a military schoolmaster at an establishment for the education of the children of soldiers at Purfleet Garrison, Essex, is convicted of the murder of Alice Boughen, aged six, in 1875. He beat her to death after attempting to violate her. He killed the child in a school closet then carried her body down to a riverbank, intending to throw it into the water. He was unable to lift it over a railing near the river and returned to the school. He was seen carrying the body back and was arrested. He confessed his guilt in the condemned cell and blamed it on drink. Executed 29 March 1875, Springfield Prison Chelmsford. Executioner was William Marwood.

Upon Easter Monday within Chelmsford gaol,
A murderer, when dying, his crime doth bewail,
Upon the dark scaffold he drew his last breath,
The penalty of murder he paid with his death.
Richard Coates was his name, by Satan beguiled,
He outraged so cruel a dear little child,
And all through the country it has been the cry,
His sentence was just, he deserved to die.
CHORUS
Gone from this life, gone from the world,
By the hands of the hangman to Eternity hurled,
May heaven forgive him, is all we can say,
As we hope for forgiveness on our dying day.

There never was known such a cowardly crime,
That we are relating at this present time.
It is dreadful to think there could be a man,
W[?]om,[?] is senses this murder could plan.
He pleaded 'not guilty' almost to the last,
Till he saw all the chance of forgiveness was past.
His poor mother begg'd him the truth to unfold,
And confess to his crime for the sake of his soul.
CHORUS
He took the poor child to the closet, [?]
Innocent and smiling to her death she [?]
He murdered her there at at he bottom of [?] field,
And beneath his great coat her dead body conceal'd,
He went to the edge of the wide rolling sea,
To throw the child in but it was not to be,
Tho' time after time the villain did try,
He could not reach over the pailings so high.

When he found that his crime he could not conceal,
He left the child's body 'neath the grass in the field,
Where the dear little angel soon after was found,
By those who so long had been searching around.
They seized him and ask'd him the crime to explain,
He cried 'I'm not guilty' again and again;
They could not believe him in spite of denial,
They sent him to gaol to wait for his trial.

As he walked from the cell through the sweet morning air,
At the end of the prison the gallows was there,
Twas the last time h'ed gaze on that beautiful sky,
As he walked to the spot where he knew he must die.
The [?] was ready, deep sounded the bell,
Twas scarcely a moment before the drop fell,
The murderer, Coates, from the world he was torn,
His body was there, but his dear life was gone.

May his fate be a warning to both old and young,
May it be an example to everyone,
From the straight path of duty never to stray,
Or we shall regret it on our dying day.
The murderer now is gone from this world,
By [?] folly to destruction is hurled,
Then pray let us all to this warning attend,
And may Heaven preserve us from his fearful den. 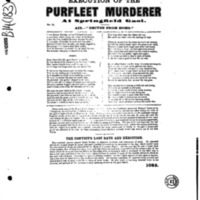