Containing an Account of many frolicksom Intreigues and notorious Robberies, which he committed: Concluding vvith his mournful Lamentation, on the Day of his Death.

Chloris, Since Thou Art Fled Away

YOu bold undaunted Souls attend
To me, who did the Laws offend;
For now I come to let you know
What provd my fatal overthrow,
And brought my Glory to decay;
it was my Gang, for whom I hang,
Well-a-day, well-a-day.

Unto a Duke I was a Page,
And succourd in my tender Age,
Until the Devil did me intice,
To leave of Vertue, and follow Vice;
No sooner was I led astray,
but Wickedness, did me possess,
Well-a-day, well-a-day.

If I my Crimes to mind shoud call,
And lay them down before you all,
They would amount to such a Sum,
That there is few in Christendom,
So many wanton Pranks did play;
but now too late, I mourn my fate,
Well-a-day, well-a-day.

Upon the Road, I do declare,
I causd some Lords and Ladies fair,
To quit their Coach, and dance with us;
This being done, the Case was thus,
They for their Musick needs must pay;
but now at last, those Joaks are past,
Well-a-day, well-a-day.

Another time, I and my Gang,
We fell upon a Noble-man;
In spite of all that he could do,
We took his Gold and Silver too
And with the same we rid away;
but being took, for death I look,
Well-a-day, well-a-day.

When I was mounted on my Steed,
I thought myself a Man indeed;
With Pistol cockd and glittering Sword,
Stand and deliver, was the word,
Which makes me now lament and say,
pity the Fall of great Devol,
Well-a-day, well-a-day.

I did belong unto a Crew,
Of as swaggering Blades as ever drew,
Stout Whitherington and Dowglis both,
We were all three engagd by Oath,
Upon the Road to take our way;
but now Devol, must pay for all,
Well-a-day, etc.

Because I was a Frenchman born,
Some Persons treated me with scorn;
But being of a daring Soul,
Although my Deeds was something foul
My gaudy Plumes I did display,
but now my Pride, is laid aside,
Well-a-day, etc.

I reignd with an undaunted mind
Some years, but now at last I find,
The Pitcher that so often goes
Unto the Well, as Proverb shows,
Comes broken home at last we say;
for now I see, my Destiny,
Well-a-day, etc.

Then being brought to Justice-hall,
Tryd and condemnd before them all;
Where many noble Lords did come,
And Ladies for to hear my Doom,
Then Sentence passd, without delay,
the Halter fast, and Tybourn last,
In one Day, in one Day.

Chloris, Since Thou Art Fled Away, is also known as Upon the Chnnge.

Du Val was born in Domfront, Orne, Normandy in 1643 to a noble family stripped of title and land. His origin and parentage are in dispute. He did however have a brother Daniel Du Val. At the age of 14 he was sent to Paris where he worked as a domestic servant. He later became a stable boy for a group of English royalists and moved to England in the time of the English Restoration as a footman of the Duke of Richmond (possibly a relation) and rented a house in Wokingham.

Before long Du Val became a successful highwayman who robbed the passing stagecoaches in the roads to London, especially Holloway between Highgate and Islington. However, unlike most other brigands, he distinguished himself with rather gentlemanly behaviour and fashionable clothes. He reputedly never used violence. One of his victims was squire Roper, Master of the Royal Buckhounds, whom he relieved of 50 guineas and tied to a tree. There are many tales about Du Val. One particularly famous one - placed in more than one location and later published by William Pope - claims that he took only a part of his potential loot from a gentleman when his wife agreed to dance with him in the wayside, a scene immortalised by William Powell Frith in his 1860 painting Claude Du Val. If his intention was to deter pursuit by his non-threatening behaviour, he did not totally succeed. After the authorities promised a large reward, he fled to France for some time but returned a few months later. Shortly afterwards he was arrested in the Hole-in-the-Wall tavern in London's Chandos Street, Covent Garden.

On 17 January 1670, judge Sir William Morton found him guilty of six robberies (others remained unproven) and sentenced him to death. Despite many attempts to intercede, the king did not pardon him and he was executed on 21 January at Tyburn. When his body was cut down and exhibited in Tangier Tavern, it drew a large crowd and was later removed to St Paul's church, Covent Garden, where it was buried under the centre aisle.

His memorial inscription reads:
Here lies DuVall: Reder, if male thou art,
Look to thy purse; if female, to thy heart.
Much havoc has he made of both; for all
Men he made to stand, and women he made to fall
The second Conqueror of the Norman race,
Knights to his arm did yield, and ladies to his face.
Old Tyburn's glory; England's illustrious Thief,
Du Vall, the ladies' joy; Du Vall, the ladies' grief.

The apparently gallant highwayman inspired a number of biographers and playwrights to add to his legend, including claims of alchemy, gambling, and much womanising. He is reported to haunt the Holt Hotel along the A4260 (Oxford Road) in Oxfordshire, a hotel where he spent many nights when it was a small coaching inn. 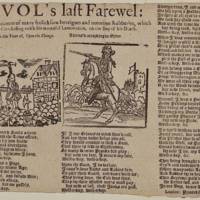