AN ELEGY On the DEATH of William Lord RUSSEL,

AN ELEGY On the DEATH of William Lord RUSSEL,

Who was Beheaded for High-Treason, in Lincolns-Inn-Fields, July the 21st. 1683.

TO sigh when Rebels fall, or shed a Tear,
Must, doubtless, make Me Criminal appear;
Not that I love thy Treason, but thy Name,
Which all ador'd, and in the Book of Fame
Gave thee a place befitting thy Deserts;
But now thou wound'st all loyal honest Hearts

Who shall we trust, if such as You Rebel?
So the great Lucifer from Heaven fell.
RUSSEEL with Hell and Furies too combine!
To kill the KING and all the Royal Line!
Ah me! it is too true! His now lost Head
Confirms whatever has on him been said.

O that I live to hear the fatal sound,
Whose very accent does my Heart-strings wound!
Is this your Loyalty; Is this your Zeal,
To damn your Soul for a curs'd Commonweal?
Though once I lov'd Thee, now I hate thy Name,
And thus I'll rend it from the Book of Fame,
That future Ages, when they read thy shame,
May praise Heav'ns Justice, and abhor thy Name.

Who, but a Monster, could Rebellious prove
To such Indulgence, Clemency and Love,
As our Dread Sov'reign evermore bestows
Upon his Friends, nay on his very Foes,
Which slew his Father, and would Him Depose?

O that our Island should such Monsters breed,
Which, Nero-like, delight to see her bleed!
Look down just Heav'n, with Vengeance upon those
That are our Sov'reigns and our Churches Foes,
And as thou hast, still all their Plots disclose:
O let 'em not, although with Hell they joyn,
E'r be successful in their damn'd Design,
Whose only aim was to find out a way
To turn our Sion to Acaldema,
And make all Loyal honest men their Prey.

Is't thus you would defend the King & Laws?
Confusion seize you, and your Good Old Cause,
And save our Sov'reign from your Bloody Paws.
Unpity'd, therefore, let each Traytor die,
While all that Loyal are, Amen do cry.

EPITAPH.
HEre under lies a Rebel, whose Design
Was to have murder'd all the Royal Line,
But was prevented by the Power-Divine:
The great Opposer of our Sov'reigns Laws,
Who dy'd a Martyr for the Good Old Cause.
May Heaven still defend the King and Throne,
And may such cursed Rebels e'ry one
Meet the same Fate; then would our Isle be blest
With Peace and Plenty, and a Halcyon-rest.

Prined by Nath. Thompson, at the Entrance into the Old-Spring-Garden near Chariug-Cross, 1683.

Ketch's execution of Lord Russell at Lincoln's Inn Fields on 21 July 1683 was performed clumsily; in a pamphlet entitled The Apologie of John Ketch, Esquire he alleged that the prisoner did not "dispose himself as was most suitable" and that he was interrupted while taking aim.

On that occasion, Ketch wielded the instrument of death either with such sadistically nuanced skill or with such lack of simple dexterity - nobody could tell which - that the victim suffered horrifically under blow after blow, each excruciating but not in itself lethal. Even among the bloodthirsty throngs that habitually attended English beheadings, the gory and agonizing display had created such outrage that Ketch felt moved to write and publish a pamphlet title Apologie, in which he excused his performance with the claim that Lord Russell had failed to "dispose himself as was most suitable" and that he was therefore distracted while taking aim on his neck. 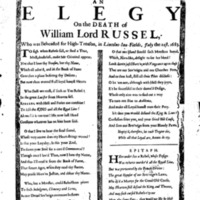