A Triumph for true Subiects, and a Terrour vnto al Traitours:

A Triumph for true Subiects, and a Terrour vnto al Traitours:

By the example of the late death of Edmund Campion, Ralphe Sherwin, and Thomas ['Thomas' crossed out; 'Alexander' written above it in ink] Bryan, Iesuites and Seminarie priestes: Who suffered at Tyburne, on Friday the first Daye of December. Anno Domini. 1581.

Wikipedia: Saint Edmund Campion (24 January 1540 - 1 December 1581) was an English Jesuit priest, executed as a traitor, but regarded by the Catholic Church as a martyr.

Committed to the Tower of London, he was questioned in the presence of Queen Elizabeth, who asked him if he acknowledged her to be the true Queen of England. He replied she was, and she offered him wealth and dignities, but on condition of rejecting his Catholic faith, which he refused to accept. He was kept a long time in prison and reputedly racked twice. Despite the effect of a false rumour of retraction and a forged confession, his adversaries summoned him to four public conferences (1, 18, 23 and 27 September 1581).

Although still suffering from his ill treatment, and allowed neither time nor books for preparation, he reportedly conducted himself so easily and readily that he won the admiration of most of the audience. Tortured again on 31 October, he was indicted at Westminster on a charge of having conspired, along with others, in Rome and Reims to raise a sedition in the realm and dethrone the Queen.

Campion was sentenced to death as a traitor. He answered: "In condemning us, you condemn all your own ancestors, all our ancient bishops and kings, all that was once the glory of England -- the island of saints, and the most devoted child of the See of Peter." He received the death sentence with the Te Deum laudamus. After spending his last days in prayer he was led with two companions, Ralph Sherwin and Alexander Briant, to Tyburn where the three were hanged, drawn and quartered on 1 December 1581. He was 41 years of age.

Edmund Campion was beatified by Pope Leo XIII on 9 December 1886. Blessed Edmund Campion was canonized nearly eighty-four years later in 1970 by Pope Paul VI as one of the Forty Martyrs of England and Wales with a common feast day of 4 May. His feast day is celebrated on 1 December, the day of his martyrdom. The actual ropes used in his execution are now kept in glass display tubes at Stonyhurst College in Lancashire; each year they are placed on the altar of St Peter's Church for Mass to celebrate Campion's feast day - which is always a holiday for the school. 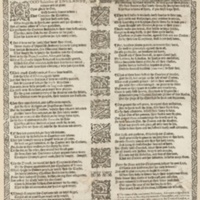