A looking-glass for traytors

A looking-glass for traytors

or, High treason rewarded being a full account of the examination of the second person that was executed in Novem. 1678 by name, Edward Coleman, Esq, who was found guilty of high treason, at the Kings-Bench-Bar at VVestminter, the 27th of Nov. 1678 for plotting and contriving the death of our soveraign Lord the King, and endeavouring to change the government of the nation and utterly to extirpate the protestant religion, for which he was sentenced to be drawn, hang'd and quartered being accordingly executed the 3d. day of this instant Decemb. at Tyburn, tune of, Aim not too high, or, Fortune my foe.

TIME and DEATH'S Advise to all VVicked Livers.
Beware in TIME, too High don't Climb,
for Fear you catch a Fall,
For if you do, 'tis even True,
Squire Katch will Pay you all.

Let all bold Traytors here come take a view,
How ancient Tiburn doth receive its due:
There dark designs, and hidden Treachery,
Will bring them all unto the tripple Tree.

Here Coleman, their Ring leader of great fame,
Hath brought himself unto his end with shame:
By striving to be great before his time,
He became guilty of a Horrid Crime.

Ambition is a bait the Devil lays,
To catch such haughty Spirits now adays:
And when that he hath cauht them in the Trap,
He gives them o're to ruine and mishap.

Too many are concerned in this thing,
Against Religion, and our gracious King:
But I shall now, the world to satisfie,
Tell how this grand offender came to dye.

The Prisoner being brought to VVestminster,
And there in Court, Indicted at the Bar:
His Crimes were all laid open unto view,
As horrid things, as ever Christian knew.

Now that he did contrive a fearful thing,
For to destroy our Soveraign Lord the King:
To change the fundamental Laws o'th Land,
As by the Sequel you shall understand.

To bring in Popery with all his might,
And true Religion for to banish quite:
With fire and sword, for to destroy and burn,
True Protestants, or force them for to turn.

The Evidence against him did appear,
And prov'd the accusation to be clear:
His [???} evasions could not satisfie,
The truth was as apparent as the sky.

The Tryal lasted for eight hours at least,
Where multitudes of people throng'd and prest:
Before my Lord Chief Justice he was try'd,
And many other Learned men beside.

At length the Jury in their verdict brought,
And in the Court declared as they ought:
The Prisoner of High Treason guilty was,
But being night, no sentence then did pass.

Next morning he was brought unto the bar,
Where Sentence did proceed on him so far:
That he should draw, & Hang'd, & quartered be,
For this his Treason, and his Treachery.

This was his fact and his sad fatal doom,
He gain'd by being an Agent for Rome:
I wish that all their factors which they send,
May come like him, to an untimely end.

For why they are of a malicious mind,
And unto blood and cruelty inclin'd:
They strive to bring to ruine a whole Land,
And make those fall, whom God ordains to stand.

But yet the Lord can frustrate their intent,
Although they daily are on mischief bent;
In his good time he will their Plots disclose,
That Justice may take place on such as those.

If that we serve our Maker as we ought,
He their contrivances will bring to naught:
That we may see the sad and dismal fall,
Of such as would bring ruine to us all.

But now is come his Execution day,
Where people flockt to hear what he would say:
Where for his Love and Favour to the Pope,
Iack Katch did fit him with a Hempon Rope.

His Quarters on the Gates they do expose,
To be a Terrour to the Kingdoms Foes:
That Traitours may example take thereby,
Least that they come to endless misery.

Then let all Loyal subjects have a care,
They be no drawn into the Popish snare,
And so God bless our King and Parliament,
And grant that of our sins we may repent.

Fortune my Foe, is also known as Aim not too high

Wikipedia:  Edward Colman or Coleman (17 May 1636-1678) was an English Catholic courtier under Charles II of England. He was hanged, drawn and quartered on a treason charge, having been implicated by Titus Oates in his false accusations concerning a Popish Plot. He is a Catholic martyr, beatified by Pope Pius XI in 1929.

There was no proof of connivance with a plot for assassination or rebellion except the testimony of Oates and Bedloe. The jury found Coleman guilty. Scroggs replied to his solemn declarations of innocence,'Mr. Coleman, your own papers are enough to condemn you.' Next morning sentence of death and confiscation of property was pronounced, and on Tuesday, 3 December, he was executed, avowing his faith and declaring his innocence. 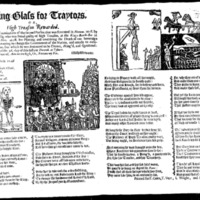