Full size images of all ballad sheets available at the bottom of this page.

Joseph Süß Oppenheimer (1698? – February 4, 1738) was a German Jewish banker and court Jew for Duke Karl Alexander of Württemberg in Stuttgart. Throughout his career, Oppenheimer made scores of powerful enemies, some of whom conspired to bring about his arrest and execution after Karl Alexander's death.

When his protector, Karl Alexander, suddenly died on March 12, 1737, Oppenheimer was arrested and accused of various crimes, including fraud, embezzlement, treason, lecherous relations with various women and accepting bribes. While some Jews tried to help him during the trial, others gave incriminatory testimonies against him. Most of the accusations could be refuted, and the charge of lechery was dropped in order to protect reputed women.

After the heavily publicized trial, Oppenheimer was sentenced to death, without naming any specific crime. When his jailers asked that he convert to Christianity, he refused. Joseph Süß Oppenheimer was led to the gallows on February 4, 1738, and given a final chance to convert to Christianity, which he refused to do. He was throttled, with his last words reportedly being the Jewish credo "Hear, O Israel: the Lord is our God, the Lord is one".

The case records were then declared secret, so until 1918 no one could realize the judicial murder done to him. His corpse was gibbeted in a cage that hung outside of Stuttgart in the Pragsattel district for six years until the inauguration of Karl Eugen, Duke of Württemberg, who as his very first act as ruler permitted the burial of his corpse below the gallows. 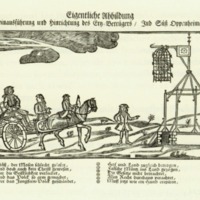 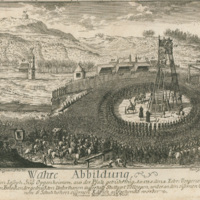