Le barbarie del mondo, by Hieronymous Porro (fl 1574-1604), depicts Italian street people collected under the unkind general heading of  "barbarism of the world". I misread the description of the actions of the people in the print (found at the University of Texas website below) as “Making a living doing unnecessary tasks of nothing”—a harsh appraisal of the efforts of people who have nothing trying to make a little bit of change for bread, though it does describe the general sentiment of the print, wrong or not. Though the written descriptions are slightly kinder than this, the depictions of the social unfortunates was certainly not.

The people described in this image--the collection of unfortunates,a veritable museum of social "outcasts"--include fools, street laborers, merchants, the disabled, prostitutes, destitute women (with children), musicians, street performers, flagellants, religious zealots, and general beggars, not to mention what must've been alley dwellers, street-sleepers and the homeless.

Not too much different from today. What makes this image remarkable to me is that it makes these generally invisible people visible, gathered together in one image.  Generally these people would be used occasionally as found objects, tertiary depictions in larger, grander artworks showing grand structures or town views, the people used to show scale, and the artist taking some small liberty by employing street people as the scale units rather than landed strollers. (See here for an example.) Holbein, de Hooghe, Bruegel--masters of the large gathering and crowds, did not attempt a solitary image to the underclasses' underclass.

Public Domain: This work is in the public domain in its country of origin and other countries and areas where the copyright term is the author's life plus 100 years or less. 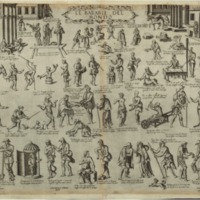