Life of the Mannings executed at Horsemonger Lane Go[...] on Tuesday 13th Nov 1849

Life of the Mannings executed at Horsemonger Lane Go[...] on Tuesday 13th Nov 1849

Marie Manning (1821–13 November 1849) was a Swiss domestic servant who was hanged outside Horsemonger Lane Gaol, London, England, on 13 November 1849, after she and her husband Frederick were convicted of the murder of her lover, Patrick O'Connor, in the case that became known as the "Bermondsey Horror." It was the first time a husband and wife had been executed together in England since 1700.

Just Before the Battle Mother? [no indicated tune]

See the scaffold it is mounted,
And the doomed ones do appear?
Seemingly borne wan with sorrow,
Grief and anguish, care and pain.
They cried the moments [sic] is approaching,
When we together must leave this life,
And no one has the least compassion,
On Frederick Manning and his wife.

She firtt [sic] was courted by O'Connor,
Who was a lover most sincere,
He was possessed of wealth and riches,
And loved Maria Roux most dear.
But she preferred her present husband,
As it appeared, and with delight,
Slighted sore Patrick O'Connor,
And was made Frederick Manning's wife.

And when O'Connor knew the story,
Down his cheeks rolled floods of tears,
He beat his breast, and wept in sorrow,
Wrung his hands and tore his hair,
Marie dear how could you leave me,
Wretched you have made my life,
Tell me why you did deceive me,
For to be Frederick Manning's wife.

At length they all were reconciled,
And met together night and day,
Maria by O'Connor's riches,
Dressed in splendour fine and gay.
Though married yet she corresponded
With O'Connor all was right,
And oft he went to see Maria
Frederick Manning's lawful wife.

At length they plann'd their friend to murder
And for his company did crave,
The dreadful weapons they prepared,
And in the kitchen dug his grave.
And as they fondly did caress him,
They slew him - what a dreadful sight.
First they mangled, after robbed him,
Frederick Manning and his wife.

They absconded, but was apqrehended [sic],
And for the cruel deed was tried,
When placed at the bar of Newgate,
They both the crime strongly denied,
At length the jury them convicted,
And doomed them for to leave this life,
The judge pronounced the awful sentence,
On Frederick Manning and his wife.

Return he said to whence they brought you
From thence unto the fatal tree,
Fnd [sic] there together be suspended,
Where multitudes your fate may see.
Your hours recollect is numbered,
You betrayed a friend and took his life.
For such there's not one spark of pity,
As Frederick Manning and his wife.

See what numbers are approaching,
To Horsemonger's fatal tree,
Full of bloom in health and vigour,
What a dreadful sight to see.
Old and young pray take a warning,
Females lead a virtuous life,
Think upon that fatal morning,
Frederick Manning and his wife.

Lots of printing errors in this pamphlet. Appears that printer did not have enough correct type. 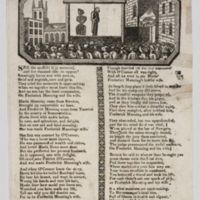