Louis XVI sings complainte before his execution in 1793

Wikipedia: Louis was officially arrested on 13 August 1792, and sent to the Temple, an ancient fortress in Paris that was used as a prison. On 21 September, the National Assembly declared France to be a Republic and abolished the Monarchy. Louis was stripped of all of his titles and honours, and from this date was known as simply Citoyen Louis Capet.

The Girondins were partial to keeping the deposed king under arrest, both as a hostage and a guarantee for the future. The more radical members äóñ mainly the Commune and the Parisian deputies who would soon be known as the Mountain äóñ argued for Louis's immediate execution. The legal background of many of the deputies made it difficult for a great number of them to accept an execution without the due process of law of some sort, and it was voted that the deposed monarch be tried before the National Convention, the organ that housed the representatives of the sovereign people. In many ways the former king's trial represented the trial of the revolution. The trial was seen as such, with the death of one came the life of the other. Michelet argued that the death of the former king would lead to the acceptance of violence as a tool for happiness. He said, äóìIf we accept the proposition that one person can be sacrificed for the happiness of the many, it will soon be demonstrated that two or three or more could also be sacrificed for the happiness of the many. Little by little, we will find reasons for sacrificing the many for the happiness of the many, and we will think it was a bargain.

In November 1792, the Armoire de fer (French: 'iron chest') incident took place at the Tuileries Palace. This was believed to have been a hiding place at the Royal apartments, where some secret documents were kept. The existence of this iron cabinet was publicly revealed to Jean-Marie Roland, Girondinist Minister of the Interior. The resulting scandal served to discredit the King.

On 11 December, among crowded and silent streets, the deposed King was brought from the Temple to stand before the Convention and hear his indictment, an accusation of high treason and crimes against the State. On 26 December, his counsel, Raymond de Sze, delivered Louis's response to the charges, with the assistance of Franois Tronchet and Malesherbes.
Execution of Louis XVI in the Place de la Révolution. The empty pedestal in front of him had supported a statue of his grandfather, Louis XV, now torn down during one of the many revolutionary riots.

On 15 January 1793, the Convention, composed of 721 deputies, voted on the verdict. Given overwhelming evidence of Louis's collusion with the invaders, the verdict was a foregone conclusion - with 693 deputies voting guilty, none for acquittal, with 23 abstaining. The next day, a roll-call vote was carried out to decide upon the fate of the former King, and the result was uncomfortably close for such a dramatic decision. 288 of the Deputies voted against death and for some other alternative, mainly some means of imprisonment or exile. 72 of the Deputies voted for the death penalty, but subject to a number of delaying conditions and reservations. 361 of the Deputies voted for Louis's immediate death.

The next day, a motion to grant Louis XVI reprieve from the death sentence was voted down: 310 of the Deputies requested mercy, but 380 of the Deputies voted for the immediate execution of the death penalty. This decision would be final. On Monday, 21 January 1793, Louis was beheaded by guillotine on the Place de la Révolution. The executioner, Charles Henri Sanson, testified that the former King had bravely met his fate.

As Louis mounted the scaffold he appeared dignified and resigned. He delivered a short speech in which he reasserted his innocence, äóìI die perfectly innocent of the so-called crimes of which I am accused. I pardon those who are the cause of my misfortunes... He declared himself willing to die and prayed that the people of France would be spared a similar fate. Many accounts suggest Louis XVI's desire to say more, but Antoine-Joseph Santerre, a general in the National Guard, halted the speech by ordering a drum roll. The former King was then quickly beheaded. Some accounts of Louis's beheading indicate that the blade did not sever his neck entirely the first time. There are also accounts of a blood-curdling scream issuing from Louis after the blade fell but this is unlikely, since the blade severed Louis's spine. It is agreed that while Louis's blood dripped to the ground many members of the crowd ran forward to dip their handkerchiefs in it. 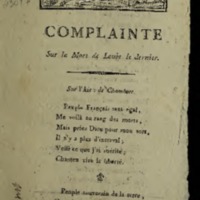 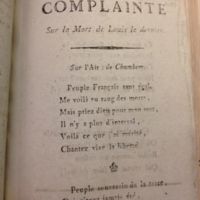 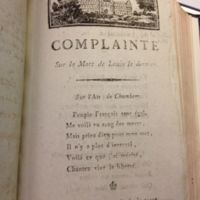 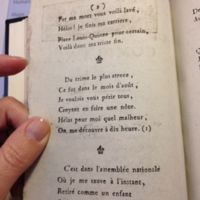 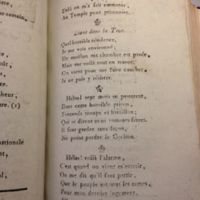 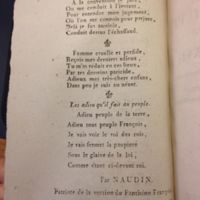